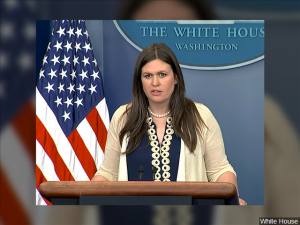 President Trump’s press secretary says healthy debate is part of the American process, but what has happened to her and Trump cabinet members in recent weeks should not be part of it. Sarah Sanders said at yesterday’s White House news briefing that it’s not just about her being asked to leave a Lexington restaurant; it’s also about members of the president’s cabinet being harassed while eating at other restaurants. But some Trump critics say it should happen even more. WLNI’s Evan Jones has the story: