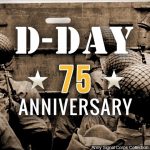 Vice-President Mike Pence will lead today’s tribute in Bedford to those who took part in the D-Day landing 75 years ago on this date — and in particular to those who died in the invasion that led to Germany’s surrender 11 months later. WLNI’s Evan Jones looks ahead: