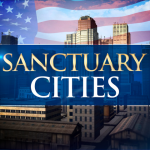 RICHMOND, Va. (AP) _ A bill aimed at prohibiting the formation of “sanctuary cities” in Virginia has been sent on to the state Senate. The bill sponsored by Republican Sen. Dick Black would bar localities from adopting ordinances or policies restricting the enforcement of federal immigration laws. The Senate Courts of Justice Committee voted 8-6 Monday to send the bill to the full Senate. Black was the only person who spoke in favor, while nearly a dozen immigrants and advocates spoke in opposition. After the hearing, several advocates approached Black and angrily confronted him until a Capitol Police officer escorted him away. Sanctuary cities limit cooperation between local police and immigration agents. Currently, no such cities exist in Virginia. Gov. Ralph Northam vetoed a similar bill last year after it passed the General Assembly.