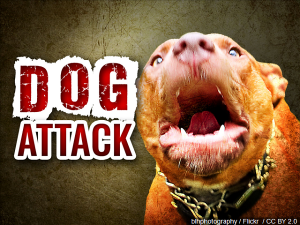 UPDATE:  Authorities in Bedford County tell WDBJ-7 they were notified that the owner attacked by their own dog hadn’t checked on it in a week. Investigators say they received a call not long before the attack claiming Peyton Bryant hadn’t been by in a week to check on her dogs, believing another person was checking on them. Police say the other dog found at the scene was not being aggressive and is Animal Control custody.

PREVIOUS: Investigators believe it was a pit bull terrier that attacked and seriously injured two Bedford County women yesterday, and it may be a month or more before knowing if the dog had rabies or some other contributing condition. Officials identify the victims as 43-year-old Jamie Bryant and her 24-year-old daughter Peyton Bryant. The two were attacked outside a home several miles southeast of Bedford. Both remain hospitalized.

UPDATED news release: The names of the two females involved in the dog attack yesterday are Jamie R. Bryant, age 43, and Peyton M. Bryant, age 24. Both victims remain hospitalized this morning. The investigation is ongoing into this incident. Results of the testing of the dog could take up to 4 to 6 weeks to be completed. At this point it appears the breed of the dog involved in the attack yesterday is a pit bull terrier.

PREVIOUS: A Bedford County mother and adult daughter were severely injured when a dog attacked them. The sheriff’s office says it happened today along Falling Creek Road several miles southeast of Bedford, and when deputies arrived, the two victims were lying on the ground with the dog circling them. Under the circumstances, a deputy felt lives were in imminent danger and shot the dog. A 43-year-old victim was airlifted for hospital treatment, her 24-year-old daughter taken by ambulance. The sheriff’s office says deputies found two small children unharmed in a nearby car.

From the Bedford County Sheriff’s Office: At 2:50 p.m. today Bedford County 911 received a call from the 8800 block of Falling Creek Road from a female reporting that she and her mother were being attached by her dog and needed help fast. Bedford County Sheriff’s deputies arrived on the scene at 2:59 p.m. and found both mother, age 43, and daughter, age 24, had severe injuries as a result of the dog attack. Both women were lying on the ground and the dog was circling them. Deputies also found two small children in a car unharmed. Due to the extensive injuries of the victims and imminent danger a deputy was forced to dispatch the dog. The mother was transported to the hospital by air and the daughter was transported by ambulance. Deputies transported the dog’s remains to the Bedford County Health Department for testing.