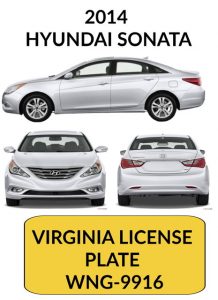 Update 6/6: As of June 6th, 2020, The Bedford County Sheriff’s Office and The Commonwealth Attorney’s Office with the help of other jurisdictions to include Georgia, Tennessee, FBI, and the US Marshalls have arrested Dalton Holbrook on the Grand Larceny charge and also 2nd Degree Murder. Holbrook is being held in Chattanooga Tennessee and bond is being determined at this time.

NEWS RELEASE: On Thursday, June 4, 2020, the Bedford Emergency 911 Dispatch Center received a call from a citizen that a male was located in his residence with what appeared to be serious injuries.  Bedford County Sheriff’s Office deputies responded to the 6000 block of White House Road in Moneta and located the victim whom was deceased. There, deputies found the homeowner, 72 year old John Menna, deceased in his residence.

This investigation is still ongoing, and the Sheriff’s Office is trying to locate the victim’s car a 2014 White Hyundai Sonata with a VA tag of WNG- 9916. Please do not approach vehicle subject should be considered armed and dangerous.

Anyone with information on this crime can call the Bedford County Sheriff’s Office at 540-586-7827 or Central Virginia Crime Stoppers at 1-888-798-5900 or go online to wwwcvcrimestoppers.org. You may also enter your tip online at http://p3tips.com or use the P3TIPS app on your mobile device. Crime Stopper callers remain anonymous and could receive a cash reward up to $1,000.00.