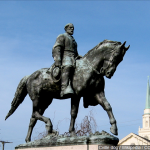 CHARLOTTESVILLE, Va. (AP) — The city of Charlottesville, Virginia, says it has complied with a judge’s order to remove the black shrouds installed over two Confederate monuments after a white nationalist rally last summer. Charlottesville tweeted that city staff removed the shrouds Wednesday morning. A day earlier, a circuit court judge said they had to come down. The decision came during a hearing in a lawsuit against the city over its attempts to remove the monuments. Separately, The Daily Progress reports another city statue of a surveyor and soldier was hit with graffiti Tuesday. The graffiti said, “I can’t breathe.” Those were the last words of Eric Garner, a black man who died after a New York police officer’s chokehold. His words have become a rallying cry in the national debate over policing, brutality and race.