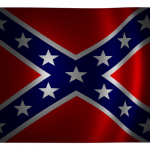 CHARLOTTESVILLE, Va. (AP) _ A massive Confederate battle flag has been raised just off a major highway outside Charlottesville. A group called The Virginia Flaggers said it raised the 30-by-50 foot (9-by-15 meter) flag Saturday on private property just off Interstate 64. The flagpole is 120 feet (37 meters) high. The group calls the flag the “Charlottesville I-64 Spirit of Defiance Memorial Battle Flag.” It says the flag is a response to the city of Charlottesville’s vote to remove statues of Confederate generals Robert E. Lee and Thomas “Stonewall” Jackson. The controversy over the statues helped draw protests that culminated in a white nationalist rally in August that turned deadly. The organization says it has raised more than two dozen Confederate flags since 2013.