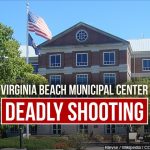 VIRGINIA BEACH, Va. (AP) — The family of a victim of last week’s shooting in Virginia Beach is asking the city to release all records about the suspect and start an external investigation, a newspaper reported Friday.

Attorney Kevin Martingayle emailed a letter to city officials and council members Monday on behalf of the family of Kate Nixon, the public utilities engineer who was one of 12 people shot and killed by a gunman at the Municipal Center last Friday, The Virginian-Pilot of Norfolk reports

Martingayle said the family wants an investigation conducted by people outside the city, similar to what Charlottesville officials asked for after riots in 2017. He said Councilman John Moss responded that he did not feel the time was right for such actions. Moss did not respond immediately to an email from The Associated Press seeking comment Friday.

“My opinion is, it’s exactly the time,” Martingayle said. “We need to shine a spotlight on this entire incident and see what we can do to learn from it.”

They are also asking the city to release the full employment and personnel records related to the gunman as well as city records and communications in the past two years expressing concerns or addressing complaints about him, including any past threatening behavior.

In an email, city officials called the requests “premature” because a criminal investigation is underway. But they said they could consider it after the investigation’s findings are released.

The shooter, DeWayne Craddock, was a nine-year engineer with the public utilities department. City Manager Dave Hansen has disputed a story in The New York Times that said Craddock had recently begun acting strangely and got into physical “scuffles” with other city workers, including a “violent altercation on city grounds” in the week leading to the shooting. Hansen said the gunman’s job performance was “satisfactory” and that he was not facing any ongoing disciplinary action or forced to resign.