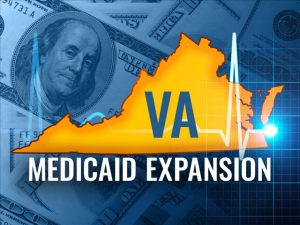 RICHMOND, Va. (AP) _ Virginia Gov. Ralph Northam has signed a new state budget that expands Medicaid to as many as 400,000 low-income adults. The Democratic governor signed the legislation Thursday on the steps outside the state Capitol. He said the bipartisan compromise on Medicaid expansion is a stark contrast to the “chaos and partisan warfare” in national politics. The General Assembly voted last week to approve the budget with Medicaid expansion. The vote ended a long-running partisan stalemate over the issue, with several Republicans joining Democrats to support the measure. A tally from the Kaiser Family Foundation shows Virginia will become the 33rd state to approve Medicaid expansion. Expanding Medicaid was a key provision of the Affordable Care Act pushed by former President Barack Obama.