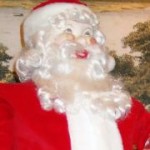 News that a mechanical Santa which had once been a mainstay atop downtown Lynchburg’s Leggett’s department store canopy was now at the Lynchburg Museum soon led to another treasure trove of nostalgia. Museum curator Laura Lembas says Richard Ayres of Forest, the son-in-law of William Glenn Daniel, who used to decorate the Leggett Windows for the holidays, contacted her recently about some pictures he had:
12-19 Leggetts 1_WEB
Lembas says that for people of a certain age, its a trip down memory lane:
12-19 Leggetts 2-WEB

You can see the Leggett’s Santa and the old-time photos at the Lynchburg Museum through the end of January.