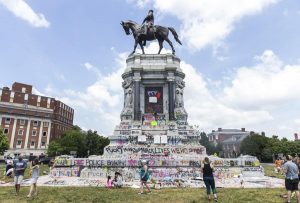 RICHMOND, Va. (AP) — A judge on Monday dissolved one injunction preventing Virginia Gov. Ralph Northam’s administration from removing an enormous statue of Confederate Gen. Robert E. Lee in Richmond but immediately instituted a new one in a different lawsuit.

The new 90-day injunction issued by Richmond Circuit Court Judge W. Reilly Marchant bars the statue’s removal while the claims in a lawsuit filed by a group of Richmond property owners are litigated.

Virginia Attorney General Mark Herring has filed a motion to dismiss the property owners’ case, which has not yet been acted on by the judge, according to Herring’s spokeswoman.

Marchant on Monday also dismissed a lawsuit filed by a descendant of signatories to an 1890 deed that transferred the statue to the state, and he dissolved the injunction associated with that case.

Northam announced plans to remove the statue in early June, citing the pain felt across the country about the death of George Floyd in Minneapolis.

Should a court eventually clear the way, it won’t be a simple task to remove the 21-foot-high (6.4-meter-high) equestrian statue, which the state has said weighs about 12 tons (11 metric tonnes).

A state board has approved a plan for removal that calls for cutting the statue into three sections for eventual reassembly elsewhere.