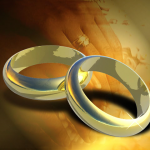 NORFOLK, Va. (AP) — On the eve of the summer wedding season, here’s news a lot of people don’t know: Virginia is one of many states where — for better or worse — pretty much any amateur can conduct a legal marriage ceremony. A friend. A relative. Even you. Depending on the city, all it takes is a little paperwork, a small filing fee and a visit or two to the courthouse.

The law that allows it has been on Virginia’s books for 100 years, but “it’s one of those little unknown niches people are not aware of,” said George Schaefer, Norfolk’s circuit court clerk. They’re catching on, though, as more couples embrace non-traditional ceremonies officiated by what’s known as a “one-time civil celebrant.” In other words, someone with a temporary authorization from the court to perform a single ceremony for a particular couple.

In Virginia Beach, 111 people filed a “petition to perform rites of marriage” last year — up 32 percent from a few years earlier. Applicants must go before a judge for approval.

Lindsay Conway’s name was on the docket a few weeks ago. She came in looking nervous, clutching scribbled notes in case she had to convince the judge of her worthiness.

Conway, a Navy wife and stay-at-home mother of two, had been asked to help her husband’s sister tie the knot.

“I’m not used to coming to court,” Conway said. “I just don’t know what to expect.”

Turns out, she over-prepared.

“Ok, who wants to do some marrying?” asked Judge Thomas Padrick Jr. as he settled himself on the bench. “Come on up. I won’t bite you. This is one of the more fun things we do.”

Conway and another petitioner were sworn in. The entire affair only took a few minutes — time mostly spent receiving instructions from the judge.

Their only legal responsibility: return the completed marriage certificate to a court clerk’s office no more than five days after the ceremony.

“If you don’t do that, they’re not really married,” the judge said, “and they’re probably going to be upset about that.”

State code requires petitioners to post a $500 bond that’s voided as soon as the marriage certificate is turned in.

“It doesn’t have to be real money,” the judge explained before sending them off to the clerk’s office to comply.

Jessica Conway, the bride-to-be, watched as Lindsay looked over the forms and signed a promise-to-pay if she neglected her duty.

“We’ve just moved,” Jessica said, “and we didn’t want to go looking for a preacher to marry us who didn’t really know us. We wanted something more intimate. She’s so thoughtful and loving, and who doesn’t want that at your wedding?”

Certainly some would object to any trend that moves marriage outside the realm of the church. According to a survey by The Knot, a national wedding resource, only 26 percent of couples held their ceremonies in religious institutions in 2016 — down from 41 percent in 2009.

Many, of course, still had a member of the clergy officiating. Or a marriage commissioner or justice of the peace. But the amateurs seem to be cutting into their business, even though Virginia Beach limits each to just one ceremony per year.

Al Sokolik is one of four city marriage commissioners who rotate shifts at the Virginia Beach courthouse.

“I was talking to the other commissioners and they’re all saying the phone calls are not there like they have been in the past,” Sokolik said.

Elliott Dejarnette, a Virginia Beach prosecutor, has conducted two weddings for friends and one for a cousin in Richmond.

With experience, he’s gotten smoother in the role: “At one of them, I forgot to tell everyone to take a seat so the entire wedding stood the entire time.”

Overall, though, he’s “enjoyed doing it. It’s another opportunity to be up there and to celebrate people.”

In Norfolk, the one-time petitioners don’t have to appear before a judge. Schaefer, the circuit court clerk, said his office handles that and they’re not being flooded with requests like Virginia Beach.

There was that memorable one, though.

When Gov. Ralph Northam was lieutenant governor, he went through Schaefer’s office to get the authority to conduct marriages.

“He was getting a lot of requests, so we made him an exception to the “one-time” rule,” Schaefer said. “He was given blanket authority until the end of his term. The court also didn’t require him to post any bond. I think because we knew where to find him.”