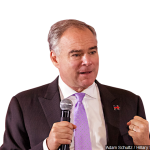 Senator Tim Kaine presented more than 18,000 petition signatures today as part of his re-election effort; 10,000 are need to be on this fall’s ballot. Kaine’s campaign says the signatures come from across the state, gathered at community events like fairs and festivals.

News release: Today, Tim Kaine formally filed his required ballot qualifying petitions with more than 18,000 signatures, far exceeding the 10,000-signature requirement, in his re-election campaign for the U.S. Senate. A team of volunteers has collected signatures from all four corners of the Commonwealth — from Loudoun to Lee, and from Alleghany to Accomack — at more than 150 fairs, festivals, and community events. More than half of all signatures are from women, more than a third are people of color, and ages range from 18 to 80. The final count is comprised of signers from both urban and rural regions, as well as from Democrats, Independents, and Republicans. Virginia Senate candidates must submit 10,000 total signatures to the State Board of Elections by the end of March to qualify for the ballot, with at least 400 signatures collected from each congressional district.