A new, 125,000-square-foot arena at Liberty University will provide additional space for sporting events, concerts, and other events that don’t require a venue as large as the 10,000-seat Vines Center.

Construction on the Liberty Arena, which will be located between Arthur S. DeMoss Hall and the Vines Center, is expected to start this fall. It is scheduled to be completed in time for the start of the first basketball game in 2020. The arena is the latest project in Liberty’s nearly $1 billion campus rebuilding, which has included several new, world-class, academic, athletics, and housing facilities.

The new arena will seat up to 4,000 — with bleacher, club, and loge seating options — and up to 4,500 with floor seating. It will host men’s and women’s basketball games, as well as women’s volleyball games. (The Vines Center will continue to be used for any games in which attendance is expected to exceed 4,000). The facility will become the operations center for the volleyball program, with expanded locker rooms and office space. 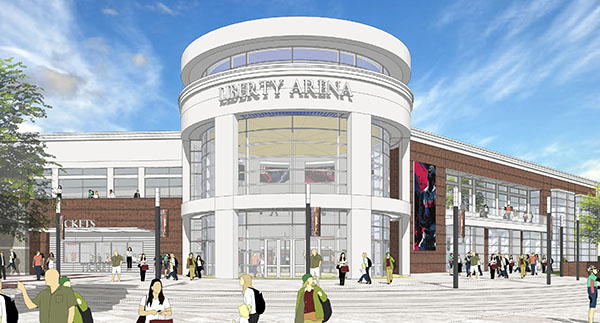 The bleacher seating can be retracted to allow for more floor space. During camps or practices, for example, two basketball courts — or three volleyball courts — can be set up at the same time. (View an interior layout.)

A grand entrance to the arena will greet guests along University Boulevard. Fans can also enter the building from the campus lawn.

According to Trey Falwell, Liberty’s vice president of university operations, the primary need for the facility is to eliminate spending countless man-hours and resources setting up and tearing down the stage and floor seating to accommodate both Convocation and sports events.

“This arena will allow us to leave the Convocation stage in place for much longer periods of time since sports events will not need the Vines Center, except on special occasions,” he said. “Another benefit is that basketball and volleyball will have a more exciting atmosphere in the new arena. Crowds that size will be more engaged because of the closer proximity to the event and to each other.” 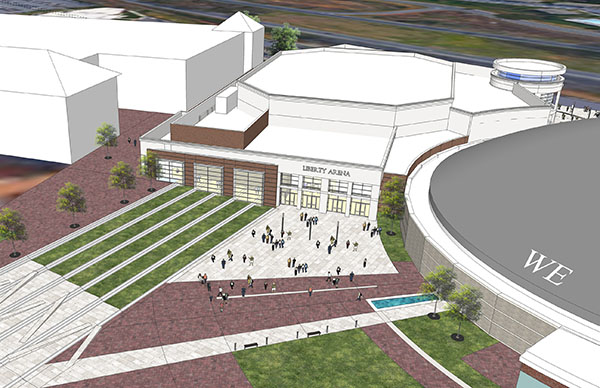