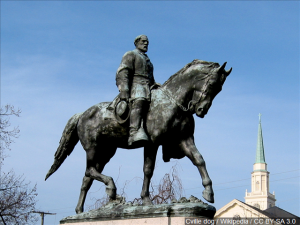 CHARLOTTESVILLE, Va. (AP) _ Police in Charlottesville have charged a Richmond man for a second time after he allegedly removed tarps covering statues of Confederate Generals Robert E. Lee and Thomas “Stonewall” Jackson. The Daily Progress reports police received a call Friday reporting that the black tarps covering the statues had been removed. When officers arrived at Emancipation Park, they spoke to witnesses who identified two men as suspects. Officers charged 34-year-old Christopher James Wayne with trespassing and vandalism. The second man was not charged. Wayne was charged with trespassing earlier this month after the tarps were removed three times over the weekend of Feb. 3. The tarps were placed over the statues in August after a woman was killed when a car plowed into a crowd of counterprotesters at a white nationalist rally.