A poll released this morning shows Democrat Ralph Northam leading Republican Ed Gillespie by 6 points in the Virginia governor’s race ahead of tomorrow’s election. The latest poll from Christopher Newport University found 2 percent for Libertarian Cliff Hyra, with another 2 percent still undecided. Results show a much more favorable lead for Northam than the latest poll from Roanoke College – it shows each candidate in a tie at 47 percent each. Gillespie scored higher on taxes and the economy; while Northam won the day on health care and education.

From the Wason Center Poll: As Virginia voters prepare to choose their next governor on Tuesday, Democratic Lt. Gov. Ralph Northam leads former Republican National Committee Chair Ed Gillespie, 51% to 45%, dropping one point to a 6-point lead in the final tracking survey of likely voters by the Wason Center for Public Policy at Christopher Newport University. Libertarian Cliff Hyra takes 2% of the vote, with 2% undecided.

Allocating the undecided voters according to their historical pattern in Wason Center surveys of Virginia
statewide elections indicates a Northam victory on Election Day, 51.3% to 46.8%. 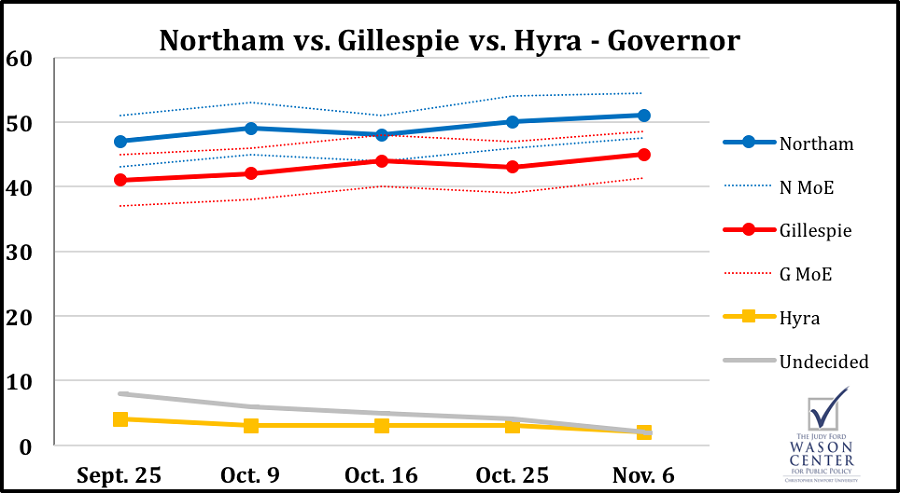 Northam’s lead is demographically and regionally broad. He leads among independents by 13 points (51% to
38%) and moderates by 29 points (62% to 33%). He holds significant leads among women, black voters, younger voters, voters with incomes below $50,000, and in Northern Virginia and Hampton Roads. Gillespie leads among white voters and men, but the candidates are statistically tied among voters 45 and older and voters in Southwest-Southside, two normally reliable Republican segments.

Likely voters are firmly in their partisan and ideological corners, with Northam getting 98% of Democratic and
91% of liberal votes and Gillespie taking 95% of Republican and 86% of conservative votes. “While each
candidate seems to have locked down his base, Northam appears to be winning the appeal to political
independents and ideological moderates,” said Quentin Kidd, director of the Wason Center.

“It’s hard to see how Gillespie can make up this deficit when he has consistently trailed Northam among independents by more than 10 points,” said Rachel Bitecofer, assistant director of the Wason Center. “To put it
in perspective, in 2013 the Republican led among independents but still ended up losing by 2.6 percent.” Down-ticket, the Democratic candidates continue to lead their Republican rivals. In the race for lieutenant governor, Democrat Justin Fairfax leads Republican state Sen. Jill Vogel, 50% to 45%. Seeking a second term as attorney general, incumbent Democrat Mark Herring leads John Adams, 49% to 45%.