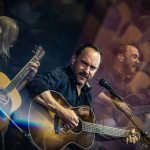 The latest tour for the Dave Matthews Band includes cities like New York, Philly, Washington – and two nights at their hometown Charlottesville. They’ll perform December 14 and 15 at John Paul Jones Arena. Presale tickets are now available through the Citi Card and the band’s fan sites.  They got on sale to the general public a week from Friday.

News release: Dave Matthews Band have announced a 10-city arena tour kicking off on November 27 at Schottenstein Center in Columbus, OH.  The east coast trek will include a two-night stand at New York’s famed Madison Square Garden on November 29 and November 30 as well as two hometown shows in Charlottesville, VA at John Paul Jones Arena on December 14 and December 15.  A portion of proceeds from the John Paul Jones shows will go to support the redevelopment of public housing in Charlottesville.

For members of the DMB Warehouse Fan Association, an online presale will begin on Tuesday, September 25 at 9:00 AM ET and closes Saturday, Sept. 29 at 3:00 pm EST at www.warehouse.davematthewsband.com. Citi is the official credit card of the Dave Matthews Band Arena Tour. As such, Citi card members will have access to presale tickets beginning Tuesday, October 2 at 9:00 am local through Thursday, October 4 until 10:00 pm local.  For complete presale details visit www.citiprivatepass.com. The general public on sale will be Friday, October 5 at 9:00 AM local, noon in Boston. The upcoming arena tour will feature a wide mixture of songs from throughout the band’s career, including material from their new album Come Tomorrow (RCA Records). With its entrance atop the Billboard 200 in June, Dave Matthews Band became the first group in history to have seven consecutive studio albums debut at No. 1. Come Tomorrow also took the No. 1 spot on Billboard’s Top Rock Albums chart, logging the biggest sales week for a rock album in more than four years.

The band’s 46-date summer tour earned rave reviews from fans and critics alike with The Washington Post saying “surprisingly heavy. Double kick drums thudded. Baritone guitar and bass intertwined to generate a sludgy and hypnotic low-end rumble.” The Milwaukee Journal Sentinel hailed their Summerfest set as “spirited…soulful.” The Cleveland Scene observed, “[fans at] Blossom Music Center were giddy with anticipation for Dave Matthews Band’s return – the annual heralding, indeed, of summer in Northeast Ohio…[the] set list that touched on all corners of the Dave world, new and old, with a triumphant wave of energy in several serious stand-out moments.”

GRAMMY® Award-winning Dave Matthews Band have sold more than 24 million tickets since its inception and a collective 38 million CDs and DVDs combined. It is the first group in history to have seven consecutive studio albums debut at No. 1 on the Billboard 200.