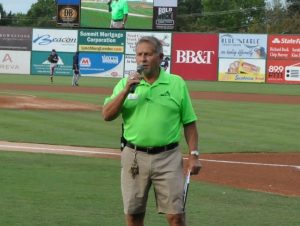 The Lynchburg Hillcats say long-time team mainstay Ronnie Roberts has passed away at age 70. Roberts spent 28 years in Minor League Baseball, all of them with the Hillcats. He started as Head Groundskeeper, then advanced to Assistant General Manager and General Manager. Roberts retired at the end of the 2018 season.

NEWS RELEASE: Lynchburg, Va.- It is with a heavy heart that we wish to inform the community that our friend, colleague, and Hillcats family member; Ronnie Roberts passed away this afternoon. Ronnie was seventy-years-old and remains a legend at the ballpark. He always had a positive attitude that left a lasting impression with fans, players, and staff members.

Upon hearing the news of Ronnie’s passing Hillcats’ President and current General Manager Chris Jones said “Ronnie will be missed and saying that is an understatement. He was a constant presence at the ballpark and helped create memories for so many in this community. It will not be the same without him.”