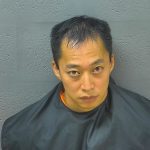 On July 27, 2020 at 10:54 a.m., officers responded to the 400-block of Three Creeks Court for a report of a burglary in progress. The victim returned home and found a male in her residence. After investigation, officers and detectives determined the individual broke into the residence several times to steal items of her clothing and sometimes returned them.

As a result of the investigation, Kevin C. Conway, 40, of Lynchburg is charged with 11 counts of burglary and 9 counts of petit larceny.