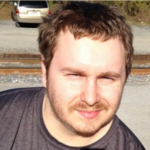 UPDATE April 18: The Office of the Chief Medical Examiner in Roanoke has identified the body recovered from the James River on Thursday April 11, 2019 as Nathan W. Faidley. The cause and nature of his death is pending the results of further tests. Faidley was reported missing from the City of Lynchburg on March 3, 2019.

PREVIOUS: A search continued today in and along the James River near Big Island for a Lynchburg man last seen almost two weeks ago. Bedford County Fire and Rescue officials say about 50 people from several agencies are searching parts of the river and its banks for 28-year-old Nathan Faidley. He has not been seen since March 1st.