Sheriff does it again: Christmas card with Miranda rights for drug suspects 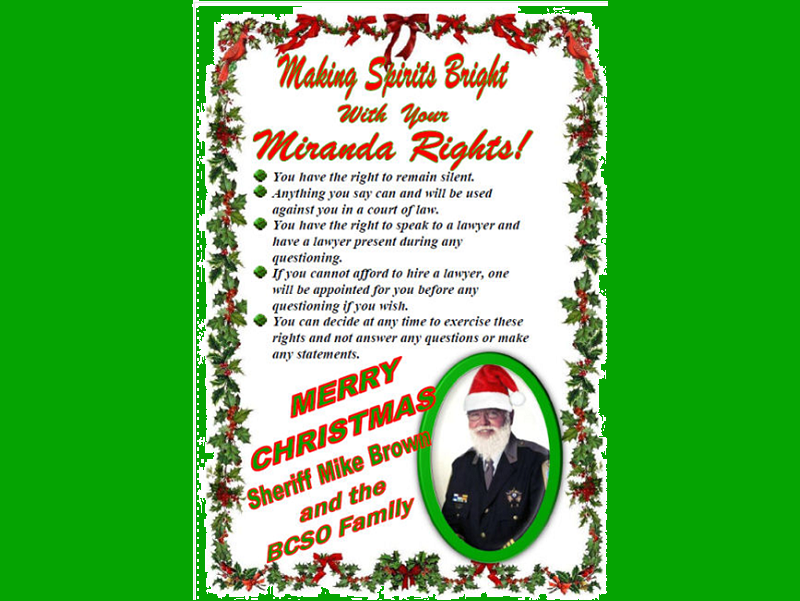 Bedford County Sheriff Mike Brown does it again – using a Christmas card to present Miranda rights to recently-indicted drug suspects. It begins with: “Making spirits bright with your Miranda rights.” This comes after a county grand jury indicted more than 20 people earlier this month on drug and firearms charges. Most have been arrested; the sheriff’s office is still seeking a few others.

News release: On December 7, 2018, a Bedford County Grand Jury indicted individuals on numerous narcotics charges and weapon offenses. The indictments are the results of ongoing narcotics investigations. On December 17 and 18, 2018, Bedford County Sheriff’s Office with the assistance of the Bedford Police Department, the Virginia State Police and U. S. Marshals arrested the following individuals on the following offenses:

The Bedford County Sheriff’s Office is seeking the public assistance in locating Perry Chester Taylor Jr, William Lee Statome Jr. and Emily Overstreet. Each of these individuals is wanted for similar narcotics charges.

Each person arrested was presented with warm Christmas wishes from Sheriff Mike Brown in the form of his annual Christmas card explaining their Miranda rights.