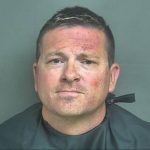 Upon investigation of these concerns, law enforcement officials received information that the suspect had been exhibiting peculiar behavior throughout the day, and had threatened neighbors.  As a result, many neighbors had sought shelter inside a garage adjacent to the property line between the suspect’s residence and their own location, due to shots being fired in close proximity to their person. Prior to the arrival of law enforcement, the suspect, Chad Everett Taylor, age 40, of Brookneal, VA, fled the scene, armed and operating a 2019 Toyota truck.  (photo included)  Deputies immediately issued a BOL, or ‘be on the lookout,’ order for the suspect, in conjunction with neighboring law enforcement agencies.  The Virginia state Police located the suspect’s vehicle, and attempted to make a traffic stop. Taylor failed to stop, resulting in a collision with a Virginia State Police vehicle, after which he attempted to flee.

After pursuit, Taylor crashed his vehicle and was taken into custody on private property off Hat Creek Road. Taylor was arrested by the Virginia State Police and charged with Felony Eluding and Assault on a Law Enforcement Officer; the Campbell County Sheriff’s office has likewise charged Taylor with Reckless Handling of a Firearm and Making Threats by Phone. No one was injured during this incident.