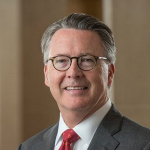 Virginia Tech has extended the contract of President Timothy Sands to run through 2024 – that decision today from the Board of Visitors. In a statement, the university lands Sands as “an inspirational and visionary leader.” He became VT’s president four years ago.

Virginia Tech News release: During its quarterly full-board meeting held today, the Virginia Tech Board of Visitors voted unanimously to extend the contract of university president Tim Sands through 2024.

Sands, who became Virginia Tech’s 16th president in 2014 following the retirement of former President Charles W. Steger, has engaged the university community in a visionary plan. With community input throughout the process, Sands  shared this vision to advance Virginia Tech’s role as a leading global land-grant institution, seeking solutions for the commonwealth’s, the country’s, and the world’s most challenging problems.

“Tim Sands is an inspirational and visionary leader. While proudly honoring Virginia Tech’s history, he is putting the university on a path that will define the future of this remarkable institution by aligning its land-grant mission with the emerging needs and opportunities that are being created by a rapidly changing world and the evolving landscape of higher education,” said Dennis Treacy, rector of the Virginia Tech Board of Visitors. “The board has full confidence in Tim’s vision, his plan, and his ability to provide transformative leadership in service to Virginia Tech.”

“It was clear to me, even before I became president, that Virginia Tech is a remarkable institution, capable of defining an aspirational future for higher education during a time of rapid change in the world around us,” said Sands. “I will be forever grateful for the opportunity I have been given to lead this remarkable community. Together, we have made remarkable strides toward our shared Beyond Boundaries vision. Our transdisciplinary Destination Areas that now engage students and faculty across all disciplines, our expanding presence in Roanoke and the National Capital Region, and our unprecedented support and engagement from alumni and friends are just a few examples of the progress we have made over our first four years.

“However, we still have important work ahead, and I appreciate the opportunity afforded by the board to maintain our course into the future,” Sands said. “As we approach our sesquicentennial celebration in 2022, I am eager to further engage with our faculty, our students, and our alumni as we advance Virginia Tech.”

During his first four years as president, Sands has championed the development of Destination Areas and Strategic Growth Areas, thematic focus areas that leverage the university’s strengths to attract both faculty and student talent and generate creative energy that extends across all disciplines. The ongoing development of these areas involves the reimagining of Virginia Tech’s Blacksburg residential campus, catalyzing the economic development of the Blacksburg-Roanoke region with a growing health science and technology center of excellence, and developing the experiential learning and research potential in Northern Virginia.

Sands has led the InclusiveVT initiative to provide leadership, collaboration, guidance, and resources to support and accelerate the implementation of inclusion and diversity goals throughout the university community.

As president, Sands has embraced Virginia Tech’s heritage of service and community and its motto, Ut Prosim (That I May Serve). He is deeply committed to see that all Virginia Tech students graduate with disciplinary mastery, technology literacy, cultural competency, resilience, empathy for others, and the passions and strengths needed for a life and career of impactful service to humanity.

In support of Sands’ vision for the university, alumni and friends combined to make $162 million in new gifts and commitments to Virginia Tech last year, a 62-percent increase in giving compared to the previous year and more than double what was raised just two years earlier.

Before coming to Virginia Tech, Sands served as executive vice president for academic affairs and provost of Purdue University in West Lafayette, Indiana. He also served as acting president during the summer and fall of 2012.

He joined the Purdue faculty in 2002 as the Basil S. Turner Professor of Engineering in the schools of Materials Engineering and Electrical and Computer Engineering. Prior to becoming provost, he served as the Mary Jo and Robert L. Kirk Director of the Birck Nanotechnology Center in Purdue’s Discovery Park.

From 1993 to 2002, Sands was a professor of materials science and engineering at the University of California, Berkeley, and before that, he performed research and directed research groups at Bell Communications Research (Bellcore) in Red Bank, New Jersey. Throughout his career, he has participated in and led research teams and academic programs that have been characterized by open collaboration across a wide array of disciplines.

Sands holds faculty appointments in the Bradley Department of Electrical and Computer Engineering and the Department of Materials Science and Engineering in the College of Engineering. His current research interests focus on microelectronics, optoelectronics, and nanotechnology. He is a Fellow of the Institute of Electrical and Electronics Engineers, the Materials Research Society, and the National Academy of Inventors. He has been granted 20 patents in electronic and optoelectronic materials and devices.

Sands has a bachelor’s degree with highest honors in engineering physics and a master’s degree and doctorate in materials science from the University of California, Berkeley. He is joined at Virginia Tech by his wife, Laura Sands, a professor of gerontology in the Department of Human Development and Family Science in the College of Liberal Arts and Human Sciences.