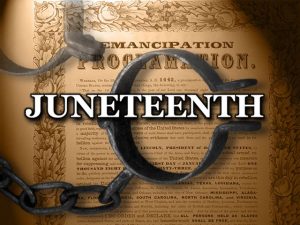 Governor Northam is proposing that Virginia officially adopt Juneteenth as a paid state holiday. Juneteenth celebrates the end of slavery in the United States. Virginia already recognizes Juneteenth through yearly proclamations, but not as an official holiday. It will celebrated this year on Friday.

Among those praising Northam at today’s announcement was Virginia native and music star Pharell Williams, who said Juneteenth deserves the same level of recognition in this country as July 4th. House Republican leaders say they support the proposal.

House Republican Leader Todd Gilbert issued the following statement: “I am proud to add my support to proposed legislation marking June 19th, Juneteenth, as an official state holiday. July 4th is the birthday of our nation, but Juneteenth is the day where it truly began to fulfill its promise of freedom for all. For the first time since enslaved Africans landed at Jamestown in 1619, the chains of bondage were finally cast off. The Republican Party was founded with the express goal of ending slavery, and it still celebrates the legacy of Abraham Lincoln to this day. As the greatest part of that legacy, Juneteenth is the day that the God-given gift of liberty for all Americans was finally proclaimed throughout the land, and it is deserving of its own special recognition and observance.”

Northam News Release:  RICHMOND—Governor Ralph Northam today announced that he intends to mark Juneteenth as a permanent paid state holiday, starting by giving state employees a day off this Friday, June 19. Virginia has long marked Juneteenth by issuing a proclamation, but the date has not previously been considered a state holiday.

Juneteenth is the oldest known commemoration of the end of slavery in the United States. It marks the day in 1865 that enslaved people in Galveston, Texas, the last of the former Confederate states to abolish slavery, finally heard that the Civil War had ended, and learned that the Emancipation Proclamation had made them free nearly two years earlier.
“Since 1619, when representative democracy and enslaved African people arrived in Virginia within a month of each other, we have said one thing, but done another,” said Governor Northam. “It’s time we elevate Juneteenth not just as a celebration by and for some Virginians, but one acknowledged and commemorated by all of us. It mattered then because it marked the end of slavery in this country, and it matters now because it says to Black communities, this is not just your history—this is everyone’s shared history, and we will celebrate it together. This is a step toward the Commonwealth we want to be as we go forward.”
“This is a big display of progress and I am grateful for Virginia for leading the way,” said performing artist Pharrell Williams, a Virginia native, who participated in the announcement. “From this moment on, when you look at the vastness of the night sky, and you see those stars moving up there, know that those stars are our African ancestors dancing. They are dancing in celebration because their lives are acknowledged.”
This announcement comes days after Governor Northam announced the state will remove the statue of Confederate General Robert E. Lee located on Monument Avenue in Richmond, Virginia. Earlier this year, Governor Northam also successfully proposed ending a state holiday that celebrated Confederate generals and making Election Day a state holiday in its place.
“State holidays are a statement of dates we think are important to all people,” said Speaker of the House of Delegates Eileen Filler-Corn. “Making Juneteenth a state holiday raises its significance and will help educate Virginians on the meaning of Juneteenth in the history of our country and our Commonwealth.”
“Juneteenth is a time for reflection, conversation, and action,” said House Minority Leader Charniele Herring. “A Juneteenth state holiday is an important step toward affirmation of Black history in the Commonwealth.”
“As we work to make changes in our systems, symbols matter too,” said Senate Majority Leader Richard Saslaw. “I support adding Juneteenth as a state holiday, to ensure that the ending of slavery is commemorated and celebrated.”
“After years of work by many people, there is momentum and will to truly change our systems to make them more equitable to African-American people,” said Senator Mamie Locke. “A state holiday commemorating the day Black people learned they were free helps ensure that all Virginians learn about, and value, how significant that event was in the history of this country.”
“There are many steps Virginia can take to advance justice and equity, and that includes adding a state holiday to mark an event that was critical in the lives of millions of Black people,” said Delegate Lamont Bagby, Chair of the Virginia Legislative Black Caucus.