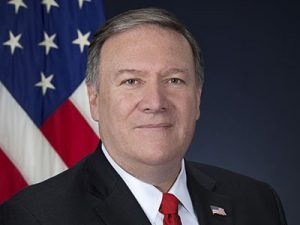 Secretary of State Mike Pompeo will deliver Liberty University’s main commencement address in May. Pompeo has previously served as Director of the CIA and a congressman from Kansas. Graduation is set for May 9.

NEWS RELEASE: Liberty University President Jerry Falwell has announced  that Secretary of State Michael R. Pompeo will address the Class of 2020 at the university’s main Commencement ceremony on May 9.

“We are grateful to Secretary Pompeo for accepting our invitation to be the keynote speaker,” Falwell said. “Secretary Pompeo is a man who leads our nation with excellence and with a passion for protecting our citizens at home and abroad. He proudly defends the freedoms upon which our country was founded, and he understands and fully supports the faith community and our mission here at Liberty. We have been privileged to welcome many of our nation’s greatest leaders to Liberty’s stage, and we are looking forward to hearing from another as Secretary Pompeo inspires our graduates to make their own marks on the world as Champions for Christ.”

Before joining the Trump Administration, Pompeo was serving in his fourth term as congressman from Kansas’ 4th District. Pompeo was the founder and CEO of Thayer Aerospace and also served as president of Sentry International, an oilfield equipment manufacturing, distribution, and service company. He is a former U.S. Army officer, having served as a cavalry officer patrolling the Iron Curtain before the fall of the Berlin Wall. Pompeo is a graduate of Harvard Law School. He is married to Susan Pompeo