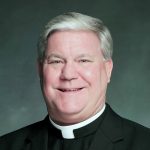 The Catholic Diocese of Richmond has suspended a Norfolk priest who once attended Holy Cross School and later served as a pastor in Farmville. Diocesan officials say the suspension of Joseph Metzgar the Third followed recent accusations that he violated the code of conduct with minors. The news release did not offer details, but it did say the violations did not involve sexual abuse. Metzgar was once pastor at St. Teresa’s Catholic Church in Farmville.

From the Catholic Diocese of Richmond:

While the complaint does not involve an accusation of sexual abuse, in accordance with diocesan policy and practice, the complaint was reported to law enforcement.  Following an inquiry into the complaint by the Office of Safe Environment and consultation with the Diocesan Review Board, Bishop Knestout met with Fr. Metzger and suspended his priestly faculties.

The suspension means Fr. Metzger cannot present himself publicly as a priest, wear clerical attire, administer the sacraments or celebrate Mass publicly, nor is he to have any interaction with minors or youth.

On December 8, 2018, Fr. Metzger was placed on temporary leave of absence from his assignment as pastor of Blessed Sacrament, Norfolk, due to previous violations of the Diocesan Code of Conduct with Minors.  On July 1, 2019, Fr. Metzger was assigned to serve as ecclesiastical notary in the Office of the Chancellor and as assessor in the Diocesan Tribunal along with the celebration of Mass at diocesan elderly housing facilities and communities of women religious in the Richmond area.  As a result of this new complaint and subsequent suspension, he is now unassigned.

The diocesan child protection policy is online at www.richmonddiocese.org.

A 2016 story in the Catholic Virginian on Metzgar’s 25th anniversary in the priesthood says he attended Holy Cross School before his family moved to Roanoke. CLICK HERE to read the article.