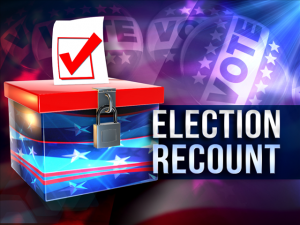 UPDATE: AP – The Virginia elections board plans to hold a random drawing next week to break a tie in a state House race that could swing partisan control of the chamber. Virginia Board of Elections Chairman James Alcorn said on Twitter Thursday that the board will met Dec. 27 to break the tie. A three-judge panel certified the 94th District as tied at 11,608 to 11,608 on Wednesday, a day after a recount appeared to give Democrat Shelly Simonds the victory over Republican Del. David Yancey. By law, the winner’s name will be drawn at random by an elections’ official. If Yancey wins, Republicans will hold on to power in the House by one seat, 51-49. If Simonds wins, a rare bipartisan power-sharing agreement would have to be brokered.

PREVIOUSLY: A court has now declared a tie in a Virginia House election that one day earlier appeared to have gone to a Democrat by a single vote. A three-judge panel certified the 94th District in Newport News as tied at 11,608 to 11,608 on Wednesday, a day after a dramatic recount appeared to give Democrat Shelly Simonds the victory over Del. David Yancey. Yancey successfully challenged an uncounted ballot he said should have been included in his total. By state law, the winner of the tie will be determined “by lot.” It was not immediately clear how or when that will take place. The outcome likely deciding partisan control of the House of Delegates. If Yancey wins, Republicans will hold on to power by one seat, 51-49. If Simonds wins, a rare power-sharing agreement would have to be brokered between Democrats and Republicans.

PREVIOUSLY:  AP – A Republican who appears to have lost a Virginia House of Delegates contest by one vote is challenging a single ballot, based on concerns raised by a GOP election official who participated in the recount. Attorneys for Republican Del. David Yancey presented a letter written by the official to a three-judge panel Wednesday. The official wrote that although he signed off on the ballot, which was not counted a day earlier, he was confused at the time. He wrote that the ballot had both candidates’ names bubbled in for the 94th District race. He says the voter had chosen Republican candidates in every other race. Attorneys for Democrat Shelly Simonds say the ballot should not be reconsidered.
The judges are meeting to certify Tuesday’s recount. If Simonds’ win holds, control of the House would be tied. A rare power-sharing agreement would have to be brokered between Democrats and Republicans.

PREVIOUSLY: A dramatic shift in control of Virginia’s House of Delegates. A recount in a Newport News district shows Democrat Shelly Simonds has unseated incumbent Republican David Yancey by a single vote. And with that one-vote victory from more than 23,000 cast, Democrats and Republicans now each hold 50 seats in the House, and they will now have to work out a power-sharing agreement. The unofficial final results are: 11,608 for Simonds,  11,607 for Yancey. Those results must still be finalized by the court that is overseeing recount, and that is expected Wednesday.