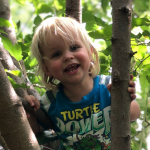 UPDATED July 9: The Medical Examiner in Roanoke has ruled that August Farley died from drowning. His death is ruled accidental.

UPDATED July 6: We await a ruling from the Medical Examiner’s office on the cause of death of August Farley, the two-year-old boy who drowned yesterday in Smith Mountain Lake. A preliminary indication is that the boy died from drowning, but an autopsy will lead to an official determination.

PREVIOUS: The search for a missing two-year-old boy at Smith Mountain Lake ended this afternoon on a tragic note. Officials report divers found the body of two-year-old August Farley in the water shortly before 1:00 pm, about seven hours after he was last seen alive. Officials say the boy’s death appears to be from drowning, but the medical examiner’s office will conduct an autopsy before there is a ruling. August and his family were here from the Fort Worth, Texas area attending a family reunion and had rented a home along the lake. They had planned to leave for home today until the boy disappeared. Relatives say they had nicknamed him “Danger Boy” for his adventurous nature.

State Police have told additional units that had been heading for the search scene to cancel. Such commands are typically given when the search has concluded. We await official word on the outcome in the search for two-year-old August Farley.

Local residents are joining law enforcement personnel in the search for August Farley, a missing two-year-old boy at Smith Mountain Lake. Family members say they are from the Dallas-Fort Worth area and were at the lake to attend a family reunion. The boy’s mother tells reporters August was already nicknamed “Danger Boy” for his adventurous behavior.

Officials have called for a drone, a helicopter and watercraft to assist in the search for a missing two-year-old boy at Smith Mountain Lake. The search involves personnel on the ground, on the water and in the air.

The Bedford County Sheriff’s Office police says a two-year-old boy has been reported missing from Huddleston. The child was last seen around 6:00 this morning. The caller tells authorities they are from Texas and have been renting a house at Smith Mountain Lake. The child is described as having long brown hair, blue eyes, and is wearing dinosaur pajamas pants and yellow PJ shirt.

From the Bedford County Sheriff’s Office: Bedford County 911 received a call this morning at 8:30 a.m. reporting a missing two year old child boy from Rosewood Lane Huddleston. The caller advised the child was last seen around 6:00 a.m.. The child has long brown hair, blue eyes and is wearing dinosaur pajamas pants and yellow PJ shirt. The caller advised they were from Texas and renting a house at Smith Mountain Lake.