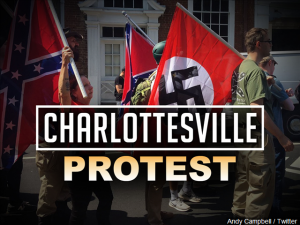 The last two California men charged in connection with the “Unite the Right” rally two summers ago in Charlottesville have pleaded guilty to a federal charge of conspiracy to riot. Prosecutors say Benjamin Daley and Michael Miselis were members of a white supremacist organization who came to Charlottesville with the intent to incite and commit acts of violence.

From the US Attorney for the Western District of Virginia: Benjamin Drake Daley and Michael Paul Miselis, members of the white-supremacist organization known as the Rise Above Movement (RAM), pleaded guilty today in U.S. District Court in Charlottesville to one count of conspiracy to riot in connection with the August 2017 “Unite the Right” rally in Charlottesville and other alleged political rallies in California.  Daley, one of the founders of RAM, was chiefly responsible for organizing the group’s presence at the Unite the Right rally. The announcement was made by United States Attorney Thomas T. Cullen, Special Agent in Charge David W. Archey of the FBI’s Richmond Division, and Colonel Gary T. Settle of the Virginia State Police.

“These avowed white supremacists traveled to Charlottesville to incite and commit acts of violence, not to engage in peaceful First Amendment expression,” U.S. Attorney Cullen stated today.  “Although the First Amendment protects an organization’s right to express abhorrent political views, it does not authorize senseless violence in furtherance of a political agenda.”

“As RAM members, Daley and Miselis trained to engage in violent confrontations and attended the Unite the Right Rally with the expectation of provoking physical conflict with counter-protestors that would lead to riots,” Special Agent Archey said today.  “The FBI will continue to work with the Virginia State Police and the United States Attorney’s Office (WDVA) to investigate and prosecute these violations.  We are grateful to the Charlottesville community and the Commonwealth of Virginia for their cooperation during these investigations.”

“Pursuing and bringing these violent individuals to justice have been of priority for the Virginia State Police Bureau of Criminal Investigation since that fateful day in August 2017 in the city of Charlottesville,” said Colonel Settle, Virginia State Police Superintendent. “Those from the Virginia State Police, FBI and U.S. Attorney’s Office assigned to this case are to be commended. Because of their dedicated, investigative efforts, no other communities, from Virginia to California, are at risk of being terrorized by the hate and violence spawned by this now-defunct, white-supremacist organization.”

According to plea documents filed during today’s hearing, Daley, 26, of Redondo Beach, Calif., and Miselis, 30, of Lawndale, Calif., were members of RAM, a now-defunct, California-based, combat-ready, militant group that represented itself as part of the new nationalist and white supremacy movement. They are the final two RAM members to plead guilty to federal riot act charges.  Cole White and Thomas Gillen each previously pleaded guilty to conspiracy to riot.

From March 2017 to August 2017, RAM and its members, including Daley and Miselis, traveled to multiple political rallies and organized demonstrations in Virginia and California where they prepared to, and engaged in, acts of violence.  RAM regularly held hand-to-hand and other combat training for members and associates to prepare to engage in violent confrontations with protestors and other individuals at purported political rallies.  They attended these rallies with the intention of provoking physical conflict with counter-protestors, which they believed would justify their use of force against the counter-protestors and shield them from prosecution for their acts of violence.  Daley and Miselis attended several such training events and rallies.

On March 25, 2017, Daley and Miselis attended a political rally in Huntington Beach, Calif., with several RAM members.  At that event, several RAM members pursued and assaulted groups of protestors and other individuals.  Following the rally, photographs depicting RAM members assaulting protestors and other individuals were covered on local news stations and on the “front page” of various Neo-Nazi and white-supremacist websites.  RAM members celebrated this coverage and used the internet to post statements, photographs, and videos of the assaults committed by RAM members at this rally in order to recruit members to engage in violent confrontations at future events.

On April 15, 2017, Daley, Miselis and other RAM members attended a rally in Berkeley, Calif., Daley, Miselis and other RAM members were dressed in gray clothing, goggles, and black scarfs or masks to cover the lower half of their faces. Throughout the day, there were violent clashes between some rally attendees and individuals protesting the rally.  At one point, RAM members, including Daley and Miselis, crossed a barrier separating the attendees and the protestors, and assaulted protestors and other individuals.

In August 2017, Daley and Miselis, along with defendants Gillen and White, planned to travel to Charlottesville to attend the Unite the Right Rally.  Daley and Miselis expected the event would become a riot and that their experience in riots at Huntington Beach and Berkeley would be valuable.

On August 11, 2017, the evening prior to the scheduled Unite the Right Rally, Daley, Miselis and other members of RAM, joined hundreds of individuals in a torch-lit march on the grounds of the University of Virginia in Charlottesville.  Throughout the march, participants chanted, “Blood and Soil!” and “Jews will not replace us!”  The march culminated near a statue of Thomas Jefferson where a small group of students gathered to protest white supremacy.  Violence erupted among the crowd, with some punching, kicking, spraying chemical irritants and swinging torches.  During and in furtherance of this riot, RAM members, struck multiple individuals with torches. As part of their plea, the defendants admitted these actions were not in self-defense.

On the morning of August 12, 2017, Daley, Miselis and other members of RAM, with hands wrapped in white athletic tape, were part of a large group of over 40 individuals seeking entry into Emancipation Park by way of Second Street when they were told by law enforcement to enter at a different location.  The group, including Daley, Miselis and other RAM members, turned, lined up, and began to make their way through a group of over 20 individuals who had come to the rally to protest against discrimination.  As they made their way through the group of protestors, the RAM members collectively pushed, punched, kicked, chocked, head-butted, and otherwise assaulted several individuals, resulting in a riot.  As part of their pleas, the defendants admitted these actions were not in self-defense.