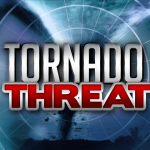 An earlier tornado warning has expired in Franklin County, but there are multiple reports of severe storm damage in the Syndorsville area south of Rocky Mount near US 220 and Fishburn Mountain Road. One home appears to be destroyed and trees are reported downed there, but it is unclear whether the winds that caused the damage were those of a strong storm or a tornado. Traffic is being diverted off a portion of northbound US 220.

A tornado watch means conditions are favorable to development of tornadoes.