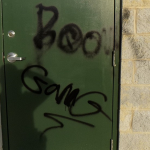 The Bedford County Sheriff’s office is looking for the person or persons used spray paint to vandalize three bathroom doors at Montvale park. Officials say two of the doors had obscene language and the third had what appears to be “Boonk Gang” painted on it.  The phrase can be commonly found on the internet and YouTube, but there is no confirmed connection.