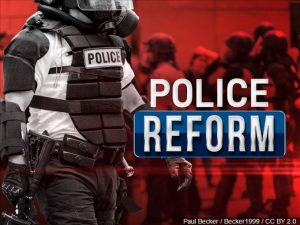 The killing of George Floyd and widespread protests over police violence have prompted lawmakers and their allies to promise sweeping changes to a criminal justice system many advocates have long said doles out disparate treatment to minorities.

“I think we’re all tired of the incremental change that has failed us and failed our community members for so long,” Portsmouth Commonwealth’s Attorney Stephanie Morales said on a conference call recently organized by Senate Democrats. “We want to do as much as possible as quickly as possible.”

It’s a far cry from earlier this year, when criminal justice reform supporters were disappointed when many of their proposals were put off for a year or sent to a commission for study.

Democrats controlled the Virginia’s state legislature for the first time in a generation and passed landmark legislation hailed by many of their allies, including environmentalists, women’s rights groups, and gun-control supporters.

But criminal justice reform supporters said lawmakers were too timid, passing some minor reforms but punting on major issues. That includes bills to end solitary confinement, abolish the death penalty and make it easier to expunge criminal records for misdemeanor and nonviolent felony convictions.

But after Floyd’s killing sparked nationwide protests — including in Virginia where several Confederate monuments have been taken down — lawmakers pledged to make criminal justice a key part of a special session scheduled in August. The session was initially set just to focus on state budget shortfalls due to the coronavirus pandemic.

Lawmakers recently began to hold hearings on criminal justice proposals that have been suggested by the Virginia Legislative Black Caucus, the Democratic Senate Caucus and a group of liberal-leaning county prosecutors.

Those proposals include banning choke holds, giving prosecutors unrestricted access to all reports and disciplinary records of police officers and downgrading the charge of assault on a police officer from a felony to a misdemeanor in cases where the officer is not injured. Those who want to change the law say the assault charge can be misused and overused by police, sometimes when they fear they will be accused of using excessive force. The current law carries a mandatory minimum sentence of six months behind bars.

John W. Jones, executive director of the Virginia Sheriff’s Association, said he’s worried what kind of message passing that law would send about keeping police safe. He also said he’s nervous lawmakers will enact bad policy by trying to do too much too fast. A particular concern is a push to weaken immunity provisions for law enforcement officials from lawsuits.

“I’m really concerned about some of these really important issues being rushed through without due process,” Jones said.

Other proposals Democrats and their allies support include requiring that most warrants are served during the daytime, and that a judge, not a magistrate, approve any no-knock or nighttime warrants, proposals that are aimed at preventing cases similar to Breonna Taylor, who was fatally shot by police conducting a no-knock warrant at her home in Kentucky earlier this year.

State Sen. Scott Surovell said some lawmakers “wanted to go a little slower and take a little harder look at things” earlier this year, but he’s hopeful the events of the last few months have brought the need for immediate reform into focus.

“The pace was really more of an issue than the policy,” Surovell said.

“The sense of urgency is growing, and we cannot ignore these issues any longer,” Hope said Wednesday at a virtual committee hearing.

The American Civil Liberties Union of Virginia is focusing on increasing police accountability, in part by establishing a set of professional standards of conduct for officers that, if violated, could result in the loss of their police certification.

Currently, police officers in Virginia can only lose their certification if they fail to complete mandatory training or are convicted of a felony or certain misdemeanors. Under the proposal, they could face the loss of their certification for misconduct, including the excessive use of force.

“Law enforcement should be treated as a profession,” said Claire Gastanaga, executive director of the ACLU of Virginia. “And police — if they want to be treated like professionals — need to understand they can lose their license for misconduct.”

Despite the new urgency in the need for reform, lawmakers are also trying to temper expectations that all meaningful reforms will pass this special session. They said given the state’s long history of racism and inequity, the work will take some time.

“This was the capital of the Confederacy, these are not problems that materialized overnight and they will not be fixed overnight,” said Sen. Mamie Locke. “We have our work cut out for us.”