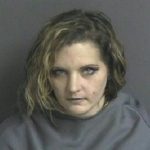 ROCKY MOUNT, Va. (AP) – A Franklin County woman has pleaded no contest to charges in the death of her 1-year-old daughter who was found unresponsive lying in a toilet bowl. The Roanoke Times reports 30-year-old Tabitha Danielle Amos entered the plea Tuesday to charges including child cruelty with injury and felony possession of narcotics. Gabriella Elizabeth Moore was found unresponsive in 2017 by her mother. Prosecutors say Amos tested positive for a “phenomenally” high level of methamphetamine. Assistant prosecutor Sandra Workman says Gabriella mostly was left in the company of a 3-year-old and 7-year-old. Amos was arrested in January of this year. Authorities say she was caught while posing online as an escort. She’s posted bail and is free until her September sentencing. Her defense attorney, Tripp Hunt, says she’s pregnant and “doing really well.”