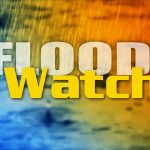 * Widespread rain, possibly moderate to heavy at times, with rainfall totals of 1 to 3 inches with locally higher amounts. Ground conditions will become saturated as rain persists, and increasing runoff will increase the threat for flooding of streams, tributaries, and possibly main rivers.

A Flood Watch means there is a potential for flooding based on current forecasts.

You should monitor later forecasts and be alert for possible Flood Warnings. Those living in areas prone to flooding should be prepared to take action should flooding develop.